Playcrafters prides itself on being "Long Island's friendliest community theatre." Founded in 1960 with a mission to promote theatrical arts and the productions of plays by non-professionals in the community, today we are one of the oldest not-for-profit community theatre groups on Long Island. We provide an outlet for local talent and reasonably priced productions to our community. We look forward to seeing you! 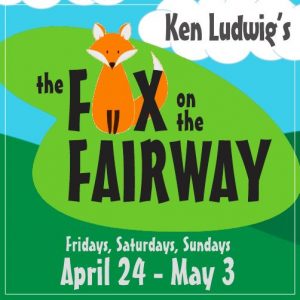 No matter what your golf knowledge, you’ll have a fun time joining us at Playcrafters’ Spring production, The Fox on the Fairway!

Ken Ludwig (Lend Me A Tenor, Moon Over Buffalo) wrote an hilarious take on the great English farces of the past.  The show is in the capable hands of our producers, KEVIN CLYNE, JOHN HANNON, and ANNETTE MAILLARD, and expertly stage managed by VICKI FLEMING.  And we have a wonderful cast to bring it to light!

The plot surrounds Bingham (JOE CAVAGNET), executive director of Quail Valley Country Club, who places a foolish bet with the cocky and arrogant Dickie (BRYAN McGOWAN) on today’s big tournament. His star golfer turns out to be a newly hired assistant, Justin (RICH CORAGGIO), who just proposed to the club’s ditzy waitress, Louise (EMILY VAETH), who promptly loses the family heirloom engagement ring. Soon there are hysterics, a broken arm, and the prospect of Bingham losing it all. The sudden appearance of Bingham’s stern wife, Muriel (JANE MAUSHAY), complicates matters even further, as she catches him much too close to Pamela (CHRISSY CAVAGNET), his boozy vice-president. Can Bingham win the game, win the wager, and get his life in order?

Celebrating our 60th year and we’re still as vibrant as ever!  Looking forward to seeing you soon.

As a supporter of live community theatre, stay abreast of everything Playcrafters and enjoy free admittance to our Annual Readers Theatre.

View photos of our past shows!